Saturday was the last day of LFFF 2013 and what a jam-packed, inspiring day it was!

We started off with HERSTORIES at 3.30pm. Five films were shown: Through the Glass Ceiling, La Forza Non Basta, Waiting For You, The Yellow Wallpaper, and Joy It’s Nina. We had representatives from three of the films with us for a panel discussion chaired by Abbe Fletcher. 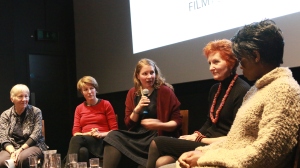 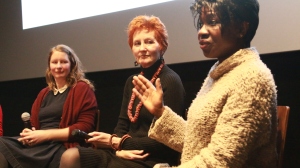 Next up, at 6.00pm, was the kick-ass FEMINIST CLASSIC Born in Flames by Lizzie Borden which was shown after the short animation Smile by Nadia Barbu. Nadia joined us for the panel along with Natalie Wreyford and chair Sadie Wearing, and an interesting discussion was had about the two films and about women in the film industry in general.

Then it was time for our LFFF 2013 afterparty and awards ceremony at the Arch Gallery!! See our separate post on that! 🙂