What Happened to Her EUROPEAN PREMIERE
Director: Kristy Guevara-Flanagan / 2016 / USA / Rating: 18 / 14 mins
Trigger warning: imagery and subject matter relating to violence against women.
An exploration of our cultural obsession with images of the dead woman on screen. Interspersing film and TV footage with an actress’ experience of playing a corpse, the film 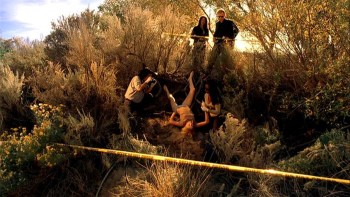 offers a meditative critique on the trope of the dead female body. The visual narrative of the genre, one reinforced through its intense and pervasive repetition, is revealed as a highly structured pageant. Concurrently, the experience of physical invasion and exploitation voiced by the actress pierce the fabric of the screened fantasy. The result is recurring and magnetic film cliché laid bare.
Honourable Mention Best Short Documentary Category, Hot Docs Festival (2016).

Director: Eve Jeffery / 2016 / Australia / Rating: 15 / 10 mins
Trigger warning: subject matter and re-enactment of sexual violence
Faith speaks about her ordeal of being raped 22 years ago, about how it changed her life and how it has shaped the woman she is today. Faith believes by allowing the world to see her story she can highlight the culture of rape that women live in every day through the media and social attitudes. The film touches on the role a woman’s faith plays in her response to trauma.

Measure Up! WORLD PREMIERE
Director: Jess Pardoe / 2016 / UK / Rating: 15 / 10 mins
Plus vs straight size is an ongoing battle in the fashion industry, but why must we discriminate and separate them? Documentary about sizeism in the plus size modelling industry, media representation, and body confidence.