Nadia Benedicto is an up-and-coming director from Argentina. Her directorial debut As A Warrior will celebrate its EUROPEAN PREMIERE at the London Feminist Film Festival on Saturday 1 December 2012 at 1.00 pm as part of the HERSTORIES short films session.

We are pleased that Nadia will be joining us along with the directors of the other HERSTORIES films for the post-screening panel discussion. In the run-up to the festival we managed to catch up with Nadia for a short interview to discuss As a Warrior, her latest film The Last Stop (La Ultima Parada), and her future projects.

As a Warrior (Como una Guerrera) was your first film as a writer and director. What is your background and how did you get into the film industry?

At the age of 18 I finished high school and moved to Buenos Aires to study there. From 2004–2009 I studied Direction at Buenos Aires’ University of Cinematography. During my studies I shot some other short films, but all of them were part of the college programme. As a Warrior is my first short film outside college. I wrote, directed, and financed it.

What was your motivation for wanting to tell Laura’s story through As a Warrior?

It’s a little mysterious, I like believing in those things. Laura’s story became to me at first in many disconnected images. In 2009 I was studying script writing with a teacher outside University and I told her that I wanted to tell a story, that I had many images and situations but for me they were all disconnected. She told me to tell her all the situations I was thinking on and without my knowledge in that moment I told Laura’s story. That is for me the mysterious and magical part. I didn’t look for Laura’s story, she found me and she wanted me to talk about that. It’s strange because I don’t know in my life women who live in Laura’s conditions, but the truth is that I was born and raised in a family where the women were underestimated and all the decisions were taken by men. I think As a Warrior is my first step to recover that voice, my own personal one and the one of all the women who live without [being able to] enforce their rights.

How did you go about financing and planning your directorial debut?

It was a pleasure. The thing is I love doing this, I live cinematography as my passion. And going to University put me in contact with many people in the same situation. I worked with friends, they understood this was my first film and I was putting up all the money for doing it, so they worked for free and also I had the University support which is a very important fact because they lent me all the equipment, lights, and camera. So, for an art that’s very hard to produce if you do not have a company producer, these two facts were determining.

What did you take away from directing your first film?

You recently finished work on Short Histories 7 (Historias Breves 7). Can you tell us a bit more about the idea behind this?

Short Histories is a national contest organised by INCAA (Instituto Nacional de Cine y Artes Audiovisuales) from Argentina. They called for new directors to send their scripts and then they choose 10 of all the projects they received.

In Argentina this is the most important short film contest, because the Institute finances the project and gives us the possibility of making a film ‘professionally’. It’s a very important step to get into the film industry. Many Argentine directors that I admire won this contest years ago, so it makes me really happy having this possibility.

Can you tell us a bit more about your contribution to Short Histories and how it relates to the other films? 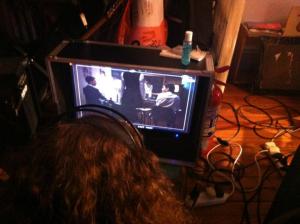 Short Histories 7 is a series of nine short films that make a feature film. But they are all different stories. None has anything in common with the others except that they are all produced by INCAA and made by new directors. My short film is called The Last Stop (La Ultima Parada) and it has recently started its festival way. The film is about a man (José, 70) who recently retired but cannot accept the idea of being retired. He was a truck driver and continues travelling Buenos Aires’ routes, pretending he is still working and lying to the people who know him. In short, The Last Stop is the story of a man who can’t accept changes.

What are your plans for the near future?

I’m working in the post-production of my first feature film. I filmed it in September and now I’m editing it. That makes me really happy because it will be my debut in a feature film. Once I finished with my movie around March next year, that takes too many effort, I’m planning to make a web series and also, ’cause I love writing, I’m working right now on the scripts of another two films. I hope I reach a producer who wants to make them!

Which is your favourite feminist film?

I wouldn’t say this is a pure feminist film, but for me the image of women that Lucrecia Martel gives us with Vero’s character reflects a lot of these problems. It’s a woman without a voice, being lived by the men who surround her.

As a Warrior celebrated its EUROPEAN PREMIERE at the London Feminist Film Festival on Saturday 1 December 2012 at 1.00 pm as part of the HERSTORIES short films session.