Suba Sivakumaran is an emerging Sri Lankan director. Suba grew up in five different countries and currently resides in the USA. Her directorial debut I Too Have a Name (Enakkum Oru Per) will celebrate its UK PREMIERE at the London Feminist Film Festival on Sunday 2 December 2012 at 4.00 pm as part of the MEMORIES screening.

We have just heard that one of the film’s leads, Nimmi Harasgama, will be able to join Jill Daniels, director of The Border Crossing, for a panel discussion following the screening. Suba however will not be able to join us for the festival, so we spoke to her in the run up to the festival to discuss her film and its premiere at this year’s Berlinale.

I Too Have a Name is your first film as a writer and director. What
is your background and how did you get into the film industry? 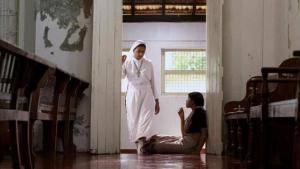 Well, I didn’t have a structured path into film. My background was really in policy and political science, and I have worked mostly in those areas. I’d always wanted to work in film however, but it took some time, working on friends’ films and the like, to find my own way into doing my first film, which this is. In retrospect however, all of my varied interests have been extremely useful in writing, production, and post production so I can’t complain!

What was your motivation for wanting to tell the story of I Too Have a Name?

As a woman, I felt that the way women experienced loss and trauma was very different from men, particularly in a patriarchal society where they are not privileged in structures of power. I also felt that it was important to show this experience, for both men and women, and for people from the developed world and the developing world, to show that there was a way in which one could locate agency in the narrative of one’s own life. Too often, women are seen as victims or purely as objects of desire; I wanted to get away from that but in a way that was still relevant in a Sri Lankan context and not in a ‘Western’ way. That sounds very abstract, but it really was the underpinning force behind I Too Have A Name.

How did you go about financing and planning your directorial debut?

I wish there was more planning and better financing!! I had an amazing cast and crew who really believed in the project. Many people volunteered their time and effort both while shooting and during the post in New York as well. It all came together when it had to, but there was very little (besides the script) that was planned in advance!!

What did you take away from directing your first film?

I think the importance of working with the right people. If we hadn’t had such a wonderful cast and crew, I really do believe it would have been a different film. Also, of course, the importance of being responsive to the many obstacles that occur during shooting, and trying to ensure that the final film is as close as possible to what you dreamed up at a desk!

I Too Have a Name was selected and screened at the Berlin Film
Festival this year. What was that like and did you attend the
screening?

The Berlinale was our premiere and it was great to have the film selected there and screened. It was also meaningful because some of the crew attended along with me all the way from Sri Lanka, making it a shared experience. It was wonderful to see it for the first time on the big screen, with real, dedicated audiences at sold out screenings! Whatever the audience size, however, I find that really good film festivals are ones with really dedicated staff devoted to cinema and unique histories, and we are happy to screen at those wherever we can.

What are your plans for the near future?

I think the next plan is really to start writing at some point on the different ideas that are swimming around in my head. Writing is never a planned process or a linear one for me, so it’s hard to predict what will happen on that front. I also really enjoy helping out on friends’ films and I imagine I’ll continue doing that as much as possible as well.

What is your favourite feminist film?

Ooh, a difficult question. I think feminism looks different in different countries, but a film I consider a feminist evocation and one that I can say did influence me quite a bit in my thinking was Zhang Yimou’s Raise the Red Lantern. As a subtle allegory on both patriarchy and censorship that showed how women were prevented from choosing their own way of life, I found it remarkable in its originality at the time and in its feminist consciousness of the developing world.

I Too Have a Name celebrated its UK PREMIERE at the London Feminist Film Festival on Sunday 2 December 2012 at 4.00 pm as part of the MEMORIES screening.