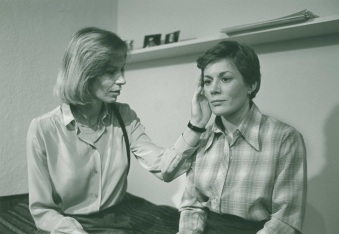 We are excited to be hosting a special 30th anniversary screening of A Question of Silence (De Stilte rond Christine M.) by Marleen Gorris who in 1996 became the first woman to direct a film that won an Oscar for Best Foreign Film (Antonia’s Line).

A Question of Silence is Gorris’ controversial debut film which became an instant feminist classic on its release. It won the Golden Calf at the Netherlands Film Festival and the Grand Prix at the Créteil International Women’s Film Festival, Paris (both 1982).

The film deals with a group of women who have never met before but who together spontaneously murder a male shopkeeper. We follow a criminal psychiatrist’s interviews with the women to try to ascertain their sanity, and the ensuing court case, with surprising results.
The film examines women’s shared oppression under patriarchy and the effects of this. Thirty years on, A Question of Silence is a relevant, intriguing, and original piece of cinema. Don’t miss this rare opportunity to see this classic feminist film.

“an unabashedly political feminist separatist film … [A Question of Silence] reveals the oppressive nature of gender relationships across class lines in contemporary Western societies and goes on to suggest … women must … discover their own voices and escape from patriarchal domination of our very categories of thought.” Linda Lopez McAlister, The Women’s Show

“[Gorris is] an important, often provocative voice in world cinema … renowned — and, in some circles, reviled — for making unapologetically feminist films that assert the rights of women as they question the patriarchy that often represses them.” Rebecca Flint Marx, allmovie.com

“[Gorris’] work treats themes of female identity, strength, and solidarity in the face of male oppression and exploitation, though she leavens them with sharp doses of wry, self-reflective humor.” Cynthia Felando, FilmDirectorsSite