Relyn A. Tan’s For Grandmother (Para Kay Ama) celebrates its European Premiere at LFFF 2013 at 6.30pm on Friday 29 November. Relyn will not be able to join us in London but fortunately had some time to tell us a bit more about her award-winning short.

What is your background and what made you want to become a filmmaker? 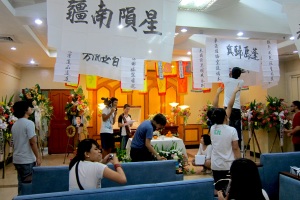 I am the fourth child of six children coming from parents who are both half-Chinese and half-Filipino. As a kid, we always watched movies as a family to unwind and spend time together. When I went to college, I initially wanted to take up broadcast communication. I didn’t get the said course and got into film as my second choice. Thinking that I would only let a year pass and eventually shift out from film, things changed and I fell in love with Film instead. After four years of hard work, I graduated cum laude from the University of the Philippines with a Bachelor of Arts degree in Film. Everything worked out for the best and today I am a freelance filmmaker taking in projects to enhance further and improve my craft.

What was your motivation of wanting to tell Hannah’s story through For Grandmother (Para Kay Ama)?
The motivation of my film was inspired by the life of my grandmother who was a hard-working and strong-willed Filipina who got married to a Chinese businessman in the 50s. When she died in 2009, I felt that I did not know enough of her yet and I was always looking for a chance to research her life more when she got married and had kids. More importantly, I wanted to make a film that would reflect my Chinese-Filipino roots and let people know more about the culture of Tsinoy families. I dedicated the short film to her and my father.

The entire film is shot in one continuous sequence. What is the reason that you chose to do this and what were the challenges this posed during the filming?
The main reason why I decided to shoot the film in one continuous sequence was to show and capture the roller-coaster of emotions Hannah would undergo throughout the entirety of the film without using any cuts. Since Chinese-Filipinos are known to be very private people when it comes to showing their emotions (more of a Chinese trait), I wanted to emphasise and show this through the film technique used. As we see Hannah control her emotions as she faces and interacts with different people in the wake, it highlights the grace and strength she has. She tries her best to compose herself despite the conflict she is experiencing. It also shows how the other characters react in real time. I wanted the audience to feel the tension as the reactions among the different characters in the film unfolded. I wanted the viewers to experience the emotional roller-coaster themselves through that one continuous take. Since my film used the long take technique, getting the perfect shot without any errors was the biggest challenge of the shoot. We had to repeat everything from the beginning if a line or cue was missed regardless if we were already on the latter part of the take. It was a make-or-break type of take every time. The entire film had to be rehearsed and choreographed well before we shot it. Fortunately, I had an amazing and hardworking team. There was a lot of pressure every time we had a take but it was also very rewarding once we got the perfect shot in the end. My actors were also very game and professional about the whole long take technique because it was something different for them to explore in terms of getting into the scene and preparing for their roles. 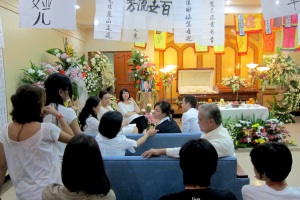 What did you take away from directing Para Kay Ama?
Follow your heart and do not be afraid or be intimidated to work with people who have been in the industry way longer than you. I was fortunate enough to work with an ensemble cast who were veterans in the industry. It was a wonderful learning experience for me as a director. I was a bit intimidated at first but they were very pleasant to work with and were very helpful and open to how I wanted them to portray their characters. I was so happy that they had amazing chemistry with one another and I really enjoyed working with each one of them. As a whole, I realised after Para Kay Ama that nothing is impossible as long as you work hard and with passion. Have the courage to take risks. In my case it was doing the one long take technique for my short film. I learned that it is okay to dream big. It is also important to have a good support system who believes in your work and who shares the same vision and passion as you do. Keep going no matter what happens and keep making films that come from the heart.

Your film has been well received and has already won a number of awards. What are your thoughts about that?
My dream for For Grandmother has always been to make it reach a wide range of audiences so that the film’s story and theme can serve as an eye-opener to others. I want to show the reality that’s happening among female Chinese-Filipinos. It is a very personal film and I am just so overwhelmed and grateful on the positive feedback and achievements it has received. It is every filmmakers’ dream to see their film appreciated and understood by many.

What are your plans for the near future?
Filmmaking is always going to be part of who I am. Given that there is so much potential for growth in the film industry, young filmmakers like me should continue to keep dreaming and filming. I definitely plan on making more films in the future. May it be another short film or my first full-length feature, I want to keep on improving my skills in writing and directing as a filmmaker. I have a long way to go so I want to immerse myself in the craft and learn as much as I can and build my portfolio. For now, I am very grateful for what For Grandmother has achieved and reached. I want to continue on promoting it as long as it can run and be screened in different festivals locally and internationally. I want to continue to share my story and my voice through my films. In general, given that the playing field is more friendly now and opportunities are easier to reach in the film industry, the most important responsibility for us filmmakers is simple – to make films that offer depth and meaning to our viewers presented in the simple language of our humanity.

What is your favourite feminist film?

Mulan and Persepolis immediately enter my mind. Biased as it may be, Mulan is close to my heart given that I am half-Chinese and can relate to the story very well. I’ve always loved watching it over and over again since I was a kid together with my sisters. As for Persepolis, I fell in love with the film while taking up Iranian cinema during my time in film school – it was such an eye-opener for me.